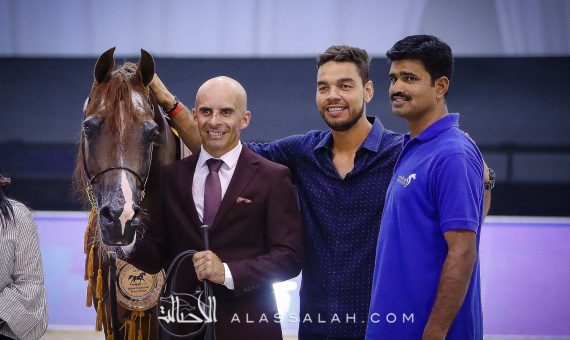 Eden C (Enzo x Silicon Sable) won the bronze title in the championship that brought together the best stallions in the world, where he led the qualifying tournament for stallions aged 10 years and over, achieving 93 points.

This stallion had sparkled during the “21st” edition of the Sharjah International Festival, and achieved the golden title, a week ago during the tournament hosted by the hall covered by the Sharjah Equestrian and Racing Club.

This stallion, who is now about 14 years old, was crowned with the stallion gold during the end of the activities of the fourth edition of the King Abdulaziz International Championship for Arab Horses 2019, and he has in his balance many titles, most notably the international bronze Dubai 2018, and the silver Sharjah International 2018, in addition to Silver world championship, and the gold of all nations.