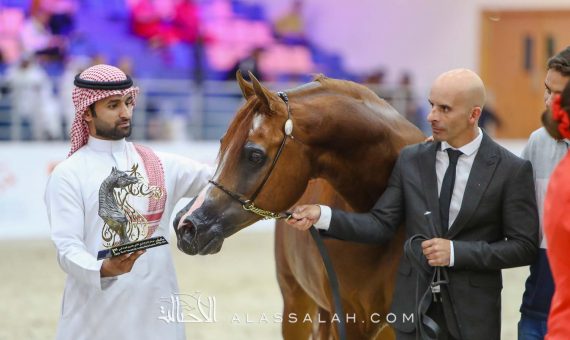 The amazing stallion “Eden C”, owned by Abdul Wahab Saeed Al Sayyed, added the third gold in his career when he embraced the title of the stallion championship during the shows of the “21” edition of the 21st Sharjah International Festival for Arab Horse, which concluded this evening, March 7, 2020, in the hall covered by the Sharjah Equestrian and Racing Club .

The stallion Aiden C (Enzo x Silken Sable) highlighted his aesthetic potential during the tournament, which witnessed fierce competition to outperform everyone during qualifying runs, achieving 92.50 points, and then won the gold title with merit.

This stallion, who is now about 14 years old, was crowned with the stallion gold during the end of the activities of the fourth edition of the King Abdulaziz International Championship for Arab Horses 2019, and he has in his balance many titles, most notably the international bronze Dubai 2018, and the silver Sharjah International 2018, in addition to Silver world championship, and the gold of all nations.